Rajoy’s defenestration as president of the government has not been an issue of the Spanish people, but rather a matter concerning the unbridled passions and struggles for power of the oligarchies that govern us. The system of oligarchies has also received the name of parasitic castes; a term, incidentally, coined by a brilliant journalist erased from the media for his strong opinions, D. Enrique de Diego. A word which had been seized by a particular left-wing politician without scruples eager to achieve merit on his way to join in the position of caste as well.

For forty years the people have not had much to say in political resolutions,  merely because they have never been represented in the Congress, much less in the Senate: a more totally useless scourge that they have been forced to maintain. As an example, we have one more recent flagrant case of the absolute absence of representation. When a character like a Mr Sánchez,  who has never been elected by anyone and did not even stand for election, allows himself the luxury of allying himself with those who wish to dismember the little that remains of Spain and occupy the Moncloa (the mansion where presidents live). They make up their beds into the caste, indeed. And we refer to caste because the office should not be, but it is de facto hereditary and life-lasting.

But the worst part of the case is that neither Mr Rajoy nor any other president has ever represented the Spaniards: a presidential make lists that are the ones that people vote and never choose (therefore we are talking about votes, not elections). The members of the list are those who in the future will enjoy handsome salaries and perks that they would surely never achieve as mere citizens: and all these thanks to their party leader, who is the one who put them on the list sorted according to their importance. In return, those same components of the list are those who then choose in Congress as president those who put him on that list: in other words. I put you on the list, and then you accept me as president of the government. To whom you owe loyalty is to me, and you will do what I say, not what the voters want. To make matters worse, let’s multiply this situation for each of the 17 autonomous communities.

So things are, those included in the lists are forced to vote what their chief tells them knowing that he can take what he gave them at any time. To make things funnier this act is given the name of voting discipline. It is not surprising that the designs of the people do not dictate the laws, but concerning the dictates of certain legal teams belonging to powerful corporations: it is not surprising that the revolving doors. You put me the bills that I want, and when you leave office I put you in my company … You will not miss anything.

The truth, we could save the immense expense of deputies so that they directly met the head of the list taking into account the importance according to the number of votes obtained.
But worse still. If it is a sine qua non condition that in a democracy the legislature (those who dictate the laws in Congress) never mix with the government, what the hell does the president of the government legislate? Where is the separation of powers? Obviously, in a democracy, the entire government should be banned from entering Congress. The function of government in a democracy is not to legislate (that should be done by deputies directly elected by the people and representing the people), but to save the people from all situations of danger and make decisions for all unforeseen cases. At the same time, officials must take care of everything planned: the hospitals, the police, teachers. Government and officials constitute the State. The State should never legislate because in a democracy that function corresponds to the nation through their true elected representative. Hence, the BOE is no more than an aberration in all this melee, which is undoubtedly a way to govern a country. Of course, you vote, but please: do not call it democracy. It may be a different way of 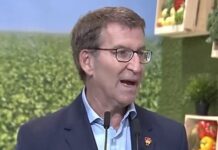